Sorry for not posting this sooner, but mundane life has been distracting me from the pure research. So I thought to get everything rolling by posting the product of previous research. Having done research into Persian cloud collars in 2015 (the post can be read at “My own Persian cloud collar research”) and having commissioned two Persian Timurid coats through my friend at Mikhaila’s Unmentionables, I finally followed through with embroidery plans.

I decided to do a collar that sat proud of the coat, but was attached at the neck. First step is to create a template. 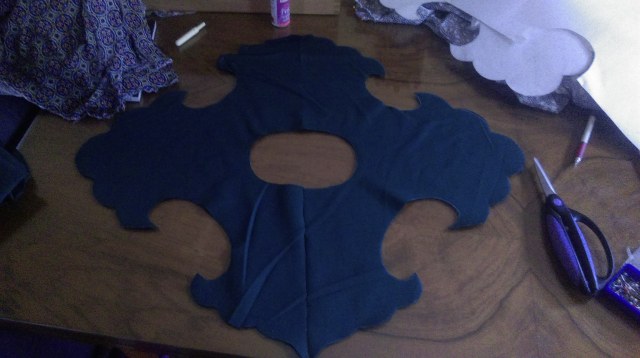 The third template design, which can be done up & go around the neck.

Having settled on the template, I used two layers of silk and linen which would eventually be lined with white linen. 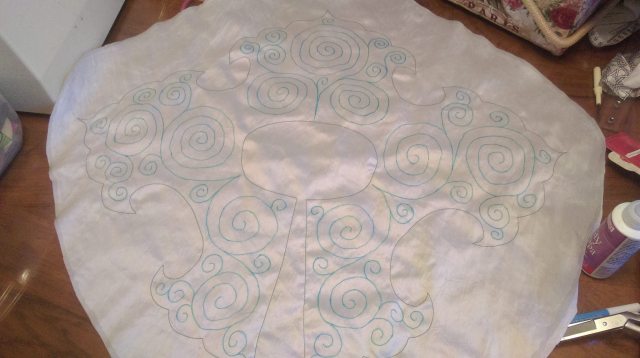 This is two layers, sewn quickly together and marked out with a soluble pen.

The design itself is quite complex scrolling. The stitch I chose to work in Au ver a Soie indigo silk thread was stem stitch. I eventually regretted this choice, as it was painful on the hands.

This stage took quite a while to get to. I had given myself a deadline of 12th Night.

The collar the night before the event. Still damp from preparations.

I entered it into the Lochac Arts & Sciences competition with the topic of “from the Middle East”. I won!

This textile was from either Eastern Iran or Sogdiana. Dated to the 8th-9th century C.E., it is a woven silk with the dimensions of 34cm by 44 cm. Seam visible on right of textile. Currently at the Metropolitan Museum of Art, although not currently on view.

Costume of the Samarkand Region of Sogdiana between the 2nd/lst Century BCE and the 4th Century CE by Fiona Kidd. Bulletin of the Asia Institute, 2003, page 35-69. Available through Academia.edu.

Ritual and Identity in Sogdiana by Melinda Niekum. Via Academia.edu.

In 1998 a shipwreck was discovered by accident in the Gelasa Strait, near the islands of Bangka and Belitung in the Java Sea. It turned out to be an Arabic dhow, filled with Tang dynasty ceramics (around 60,000 pieces), gold, silver and spice-filled jars. The dhow itself was unusual, held together by coconut fibre instead of pegs. It was 6.4 m wide and 18 m long and made out of teak and rosewood.

The dhow dates to the 9th century, with many of the items intact. It is called Changsha ware as it was made in Changsha in the Hunan Province. The bowls were stored in dunan jars, which protected them from being destroyed by the tides and coral growth.

The bowls had both Asian and Islamic designs, showing the markets the bowls were made for. The ultimate destination was thought to have been Abbasid Al Basra (Basra today). This became one of the most information rich finds of the Silk Road, showing the routes taken hauling heavy objects like ceramics. 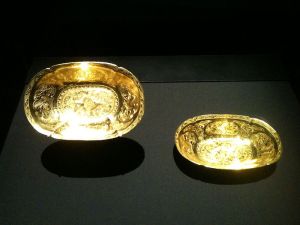 The Sultan of Oman had a replica made of the dhow, and gifted it to the people of Singapore. The site covering the Jewel of Muscat has a lot of information about the replica and it’s voyage to Singapore. However, some of the artifacts are in an exhibit in the Freer & Sackler Gallery, as well as in Singapore.
Bibliography
Editorial: Tang Treasures, Monsoon Winds and a Storm in a Teacup on Wreckwatch.
Made in China: A 1,200-year-old shipwreck opens a window on ancient global trade by Simon Worrall. National Geographic Magazine.
Changsha Blue and Copper Red Wares and The Religious Motifs by Lim Yah Chiew (Singapore) on koh-antinque.com.
Changsha on koh-antique.com.