Ottoman music
This site researches the musical identities of men and women through studies in ethnomusicology. Written by Prof. Ş. Şehvar BEŞİROĞLU and titled Music, Identity, Gender
The Mehterhane
These are the military bands. Here is a digest of the history here. Here is a link to a You tube video with pictures, and this one. Some cds are available on Amazon, There are some cds available through JB Hi Fi Online.
Mevlevihane or spiritual mystic music
Here is the Wikipedia entry for Whirling Dervishes. A You tube video. There are many cds available through Amazon but please be aware that this is sacred music and not suitable to dance to.
Ottoman Classical
Lots of cds available through Amazon here but a lot of them are from the 18th Century. 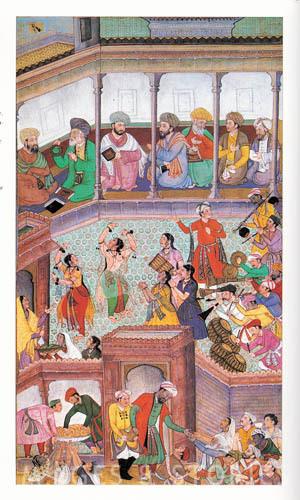 Andalus music
Quite an influence, especially after the Expulsion. Spread throughout Eastern Europe and through North Africa with the Sephardi Jews and Muslims after 1492. The wikipedia history is here, which also covers modern music as well. There are lots of Sephardi cds available at Amazon here but the Sephardi did not disappear after the Expulsion and there are many communities active today. Some of the cds are modern! Or try JB Hi Fi online here. There is also lots of Muslim music available through Amazon here.

There are many posts on Andalusian music, so please click on the music tag on the right. This is a pdf document through Google Docs covering Andalusian Music and the Cantigas de Santa Maria. This site has three pages of historical music on cds that are available.

Arabic music
Spread throughout the world through Crusades and even trade. The brief history on wikipedia which doesn’t give any names. However, I know Jordi Savall has done some cds that cover the time period, as well as Michele Claude. There is three cds available through Naxos, which are period (Byzantium to Andalusia, Anon and Music from the Time of the Templars). 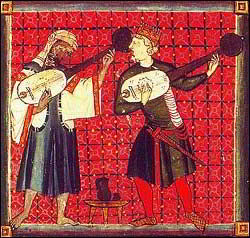 Persian music
From the Islamic time of the 7th century onward, music and musicians had already enjoyed centuries of popularity. The wikipedia entry for Persian Traditional music is here and the entry for Persian Classical music is here. Many cds are available from Amazon here but some are modern in traditional style. Please listen. There are some classical Persian cds here at JB Hi Fi.

Music that can be gotten away with at an event
Yes, there are some cds that can be played on a discreet player that can be used, as they sound “right”. They are Music of the Fellahin and Music of the Ghawazee. They were recorded in the seventies and is only available in MP3 download, as the cds are no longer in print. They are folkloric!.

Anything from Omar Faruk Tekbilek is also good, except for the remixed albums “Rare Earth” and “Shashkin”. Also available through JB Hi Fi online.

Another possibility is Gypsy Caravan but don’t do the remixes.

There is also Solace but be aware that these are usually for tribal & tribal fusion dance. Please choose carefully.

George Sawa studies and plays medieval music from one side of the Mediterranean to the other. He plays the Qanún and has music available for purchase through his website.

This article is written by Robert Roach (known in the S.C.A. as Lord Robert Downey of Forfar) called Introduction to Arabic Music History and Theory, is about the different types of music about in period.

This site allows you to download Folk music in .tif format or as a zip file at the bottom of the screen.

There are two JStor articles covering Sufi music. The Sacred Music of Islam: Samā’ in the Persian Sufi Tradition by Leonard Lewisohn and Music and Astronomy in the Muslim World by Jozef Pacholczyk. Both articles are on Scribd.

Ottoman music is covered a little by Wikipedia but there is more information in the Turkish Music Portal, with music available for search on Neyzen, but you need to know the musical terms.

The Meeting of Christian, Jewish and Muslim Musical Cultures on the Iberian Peninsula (Before 1492) by Amnon Shiloah. JStor article.