After the Fall of the Roman Empire in the 7th century, Western Europe was plunged into the Dark Ages. Which means that except for a few places, much of the knowledge of the Greek & Roman Empires were lost. However, with the growth of Islam, the knowledge was kept in the East, studied and even improved upon. Some of these doctors were Al-Kindi (known in the West as AlkIndus), Al-Razi (known as Rhazes or Rasis), Ibn Sina (Avicenna), Abu Al-Qasim, known as Abulcasis in the West and Ibn Nafis.

Among their many studies was the study of herbs and spices for use in treatment of diseases. This also includes the amount or concentration used. Many of these herbs and spices can be found in use today, available in market places over the Middle East. 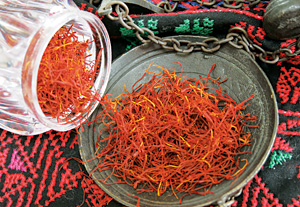 Saffron, the most expensive spice in the world, was used in rice and chicken dishes for the earthy flavour and rich colour. It also was used in the production of perfumes. However, in Arabic medicine, offspring of Greek medicine, it was believed to be hot and dry. It was used for inflammation and stomach cramps, liver, bladder and kidney infections and menstrual complaints.

Cardamom, a member of the ginger family, was used extensively for the flavour in savoury dishes, sweet dishes and pastries and drinks (including coffee!). Medically it is considered a carminative and a stimulant.

However, there are some herbs that are used for medical purposes only. These include alum and petroleum. Alum is used to control bleeding, as a deodorant and is mixed with henna. This means that care must be used when mixing up henna. Petroleum was used on sores and broken bones, as well was being taken orally (similar to caster or fish oil today) for arthritis, asthma and bladder infections.

Asafoetida is a strange herb in that it is also used in cooking (a tiny amount in meat dishes) and as a medicine. It became a popular flavour in the Middle East as it imparted a “metallic” flavour that suited some meat dishes. Dissolved in water and drank, it soothed stomach cramps, coughs and colds. Usually also flavoured with honey to help disguise the bitter flavour and smell.

However, water was also used to treat illnesses, chronic pain and stress, such as the sacred hot springs and waterfalls of Ma’in, Jordan. 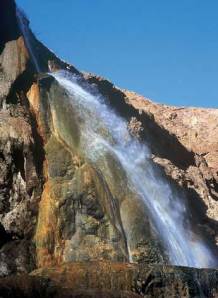 King Herod (going very early) was known to have gone to these pools. They are heated to 45 degrees Celsius by volcanic fissures. It is also near the Dead Sea.