The Egyptian Coptic period covers the 5th-9th century. This is from the fall of the Roman Empire, the rise of Christianity and the invasion of the Fatimids in the 10th century. 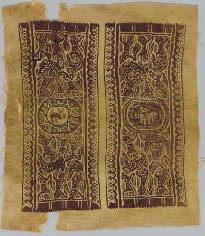 The above textile was sold by Christies for $3,840.

The decorations were woven bands of clavi and woven/embroidered segmentae on the fronts and shoulders.

Being Egypt, most of the recovered tunics (preserved in the dry conditions) are linen. However, there are some that are fine wool. The embroidery was originally done in wool and silk, using chain stitch, cross stitch, whipped running stitch, satin stitch, stem stitch and split stitch. Unfortunately due to non-professional archaeologists finding the textiles, they can be cut up, keeping only the embroidery while the rest of the textile is discarded.

The tunic is in the Victoria & Albert Museum. Due to the tunic’s fragility, a replica was made and is available for the public to try on. The creators talk about it here and here. The scientific analysis of the tunic is gone over here.

This is a close up of a child’s tunic in the Museum of Fine Arts Boston. Thought to be 6th or 7th century.